I’m an animation fan, and started drawing fanarts (drawings of comics, cartoons, video games an other things I'm fan of) in 2003. I never stopped. For me, fictions aren’t only stories, but allow to convey emotions, values, and communicate messages of hope.

It’s Cindy! You can call me that or Doudy (my artist name), Doud’, Cin... or even create nicknames yourself if you want =3

What pronouns should I use for you?

I don’t care. He/she/them/mermaid… Anything is fine ^^

Why “Doudy” and how is it pronounced?

It’s basically my last name (Deiber) transformed, because I wasn’t inspired for a username when creating my Tumblr account.

As for the pronunciation, it’s originally/officially “Doo-dee”, since I had the French version in mind. I don’t mind hearing “Dow-dee” tho, so you’re free to choose XD

Do you have any original projects?

Yes! My comic “Walls To Break” has its own blog on Tumblr and Deviantart. You can visit the official page and get the full comic book here or at cons I exhibit at! (Schedule here.)
I don’t post all the pages online, so read the book to not miss anything!

Others are to come (I think I’ll always be over-inspired, I don't know art block). They are still ideas that I'm working on and that I’ll share when it’ll be ready ^^

What are all of your projects?

What art softwares do you use?

I was using "Paint Tool Sai" when I got started at digital art. Then I wanted to do animation and got "Clip Studio Paint" that I use for everything since I got used to it. I was using "Medibang" for a while for comics panels, because I liked the way to do them there and I didn't understand how it worked on CSP (now I get it). It's literally the only thing I was doing with that software and the only reason I installed it XD

What graphic tablet do you use?

I’m not good at label things, so I hope that “Wacom Bamboo” is enough? ^^’

How can I support you?

And to help me make my dream come true: becoming an independant artist, I sell merch (goodies, posters...) in my online shop and at cons (schedule here), I'm on these financial support websites: Patreon (with rewards), Ko-fi, PayPal and I do commissions (info here)

Can I use your characters, translate, dub your comics, make fanarts and AUs (Alternate Universes = alternate versions of a story from a cartoon or from any other type of content)?

Of course, as long as it’s credited! (Mention me as the author/creator, AND link back to me/the original blog!) My happiness level is at its max when it happens

About fanarts, I make compilations videos on Youtube (example here), as a big thank you to my fanartists! They’re presents, art using my own content, I’m not making any financial benefit and I credit big time, so it’s logic that I’m free to do it ^^ To avoid surprises, I’m letting you know that by making me fanarts, you allow me to feature them. It makes me so happy that I wanna do something in return

Everyone is delighted so far and it’s all I wish

I don’t allow reposts anymore. If you wish to post my content (fanarts, comic pages, anything made by me) on a social media where I already am (see here), please share from the original post! =3 Otherwise, I only allow links redirecting directly to my original post AND with credits (by precising "by Doudy")! Thanks!

There's an exception for commissions if you buy me one, my drawings prizes if you win one from raffles and/or contests, and my drawings if you get one from me as a gift. Provided you post the version with watermark and credit me (mention me as the artist AND put a link to me)

You can also use my content to make memes, put it in videos (edits, AMVs...), under the same conditions stated in the previous paragraph.

Can I sell merch, commissions, make any financial profit using your content?

If you wish to financially gain anything by using my content (my characters, my backgrounds and any of my designs), you have to support me on Patreon by pledging to the corresponding tier

Be it merch sold at cons or online, commissions, monetized videos (fandubs/dubs made by fans, animations…). Anything.

If you use my fancharacters/characters based on an already existing character (so far, it concerns “Undertale”, "Cuphead" and “Bendy and the Ink Machine”), also respect their creators’ rules. hereare the ones for Undertale, here for Cuphead, and for Bendy And The Ink Machine here.

My OCs (my Original Characters) that are inserted in my fanstories (stories based on a cartoon or any other type of content) don’t need to follow the copyright rules of these already existing contents, since they aren’t inspired by these contents, and are originally used in my original stories.

For example, my AU Sanses (Water!Sans, Storms!Sans…) are based on Sans from Undertale. So it is concerned by the Undertale rules AND mine. 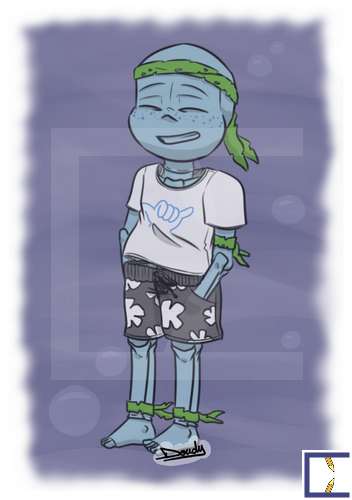 Sans from the video game Undertale 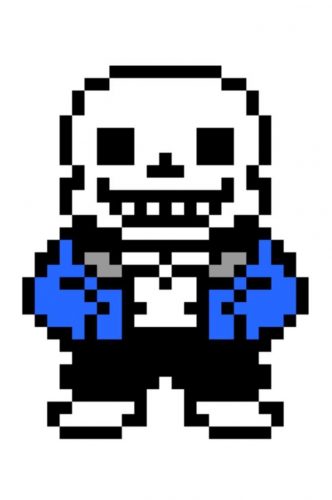 As for Andréa from my "Walls To Break" comic, she isn’t based on any Undertale character despite her appearance in my "Frenchtale​" AU. So using her only follows my rules, not the Undertale ones.

If you have any doubt, don't hesitate to ask me ^^

About my works based on Undertale and Deltarune

How can your versions of Monsters urinate, get sick, procreate, etc?

My headcanon is that Monsters have organs like Humans. They physically exist, but are made of magic. In some cases (like Skeletons), we can’t see or touch them. But they’re here and can be affected by sickness. Monsters can then be contagious to Humans, and vice versa. If there’s a need to see or touch the organs (to heal, procreate…), I also use the headcanon of ecto organs or whatever how you call it XD Like, they can make them appear at will. If they're unconscious or unable to do it, the doc uses science to do so. And I like to imagine that checking the soul helps them see where the problem is in case of sickness or wound. Like in “HoneyMustard” for example, Swap!Papyrus has a hole in his soul, its location corresponding to the lungs. I can go far sometimes, ik XD

About procreation, there are other ways I imagined to make my stories possible. First, Sons in “Pacific Rundertale” and “Frenchtale”, who is my first Undertale fanchild (child character of other characters, created by a fan), and a double clone of Sans and Frisk. Simply because I didn’t consider organs existing in Skeletons back then, and it was the first credible thing that came to my mind XD Then Nemu in “HoneyMustard”. I just wanted a fanchild for Swap!Papyrus and Fell!Sans, and had to find out something since they’re both males. So I imagined that when Monsters are deeply in love, cuddling (without sexual act) and really connected and everything, their souls each one gives a part to fuse with the other soul’s part, creating a new living being. I didn’t think of a contraception for that case tho. There Fell!Sans wasn’t ready, then Swap!Papyrus got sick, and they now have a sudden huge responsibility. Good luck to them =,D And now that it’s done, I can’t say that the future parents have to wish to have a child for it to work. I mean, it’s possible, just not in that specific AU since I didn’t do it like that lol. Unless they both unconsciously wished for one~

Need some aspirin, or was I clear enough? XD Kudos to you for staying focused ‘til the end!

About Ink And I

When is this Ink version's birthday?

He has a whole birth month! The original Ink's birthday is April 15th. But for Ink from Ink And I, it's the date of a nightmare beginning. He was created at the same time as his alternate versions, on April 15th, and appeared in his anti-void (universe filled with void) with the other drafty characters and elements of this AU, never finished. (Original Ink's backstory here. What's next is about Ink from Ink and I and diverges from the stories of the other Inks.) Ensued a long period of solitude. Until October 1st 2016, when the first INKtobertale made its entrance. A challenge for the Ink fans. Including me XD All excited and envious of supporting the artists like his alternate versions, this event gave Ink the courage to start venture out in the multiverse. He visited our universe (AU where Undertale is a video game) to see the artists. After meeting me, he decided to hang out at my place, so he wouldn't have to go back to his anti-void.

Anyway, all this to say that he considers INKtobertale as his true birth. And to fill the emptyness that he was feeling during those long months of void, might as well party for a whole month per year!

Are Ink and you a couple?

What does Ink think of Error and of the Ink x Error shippers (fans imagining characters couples)?

Ink: (Heyo, it's me!) The ship (fictive couple) is okay for me! Even if I don't appreciate Error. After all, it's a big inspiration for the fans, and it's about other versions of me, so no problem ^^

Why doesn't Ink always have his paint vials on him in this AU?

I got used to draw him without, when he isn't on a mission and that he has them available close to him. I then created a headcanon of him taking them only when on a mission, or when he knows that he won't come back home soon enough to recharge.

Why not "Watertale" or something that sounds "better"?

In Waterfall, how is there water underwater?

Sans already replied this (see on Tumblr or Deviantart), but I can see this question coming again. Check the post description for more info!

Thank you for your interest!

This FAQ might be updated in the future if needed.